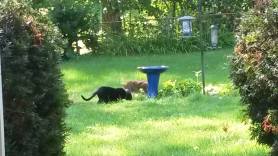 My 12 month contract was ending, and the State of Illinois wasn’t renewing any contracts because they’re broke, so I decided to move to St. Louis where there are more universities. I found a cute little bungalow only a mile from the house where I was born. I was surprised that I could rent a house for less than an apartment, but the back yard is wonderful! And the twins soon learned to love exploring it.

I knew that neither kitty liked being locked out. Having grown up in the wild, they both would panic if I ever accidentally closed the door while they were outside, even if I was with them. They knew what it was like to fend for themselves, and they appreciate their indoor cushy life.

But one night, I had gone out the back door to get something from the car, and apparently Riley snuck out. (There’s a reason I nicknamed him Riley the Rascal!)

I didn’t realize he was missing until the morning, when he didn’t show up for breakfast. I searched the house top to bottom. Where was he? I called my brother L to come help, but he couldn’t find Riley either. He was GONE.

My heart sank. The next street over is busy, and the next one from that is very busy. I contacted the woman who runs our city shelter and checked the online lost animals pages and the city’s Facebook page. And of course I kept going outside to call and look for him. I took food and treats with me.

Three nights later, I thought I heard something. It was nearly midnight, but I went out and called. There was a mournful meow from the darkness. Riley slowly came into the light. I kept calling him, but he looked totally freaked out.

I talked softly to him and slowly got closer. It started to rain. I kicked off my slippers because it was hard walking in the grass. I got close and he started to back off, so I almost literally jumped on him and held him tight. He was filthy, and he kept wriggling, but I managed to get back to the house and inside. He took off and hid, but at least I was able to text everyone that he was safe, and to finally sleep!

In the morning he was cocky, strutting across the kitchen like a tough guy. ‘I went out and partied all weekend. I’m a cool cat.’ 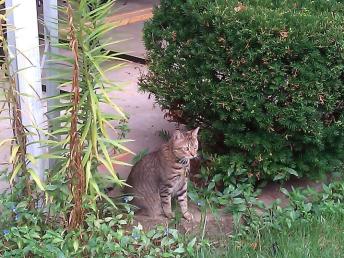 Riley didn’t show up for dinner one night, which is not uncommon. He’s not motivated by food like his sister Greta. But a while later I went into the bedroom and discovered vomit, so I thought he might have an upset tummy. I found him in the basement, under the couch – not one of his usual hiding spots. He let me come up to him and pull him out, so I knew he wasn’t feeling well.

I brought him upstairs and put him on the bed where I could get a good look at him with the overhead light. I figured it was time for his hairball medicine, so I grabbed it on the way. After I laid him down, I reached for the medicine and of course he tried to get away.

But, he was struggling. His back legs weren’t moving. I touched his foot and it was cold.

This is not good.

I managed to find the phone number for the animal emergency room and called them. When I described his symptoms they told me to get there as quickly as possible.

I called my brother L and he met us there. Thankfully it’s right down that same busy road I was worried about when Riley had his weekend adventure.

The doctor examined Riley and said that he had a blood clot on his spine.

She said that due to its location, it’s called a ‘saddleback’ clot, and is the equivalent of the ‘widowmaker’ in humans. There is no treatment.

She offered a painkiller shot when I told her that I wanted to see our vet in the morning. I wasn’t about to let Riley be euthanized in a strange place.

He seemed calmer when we got home. I had my brother put the spare room mattress on the floor and bring the extra litterpan upstairs.

The twins and I laid there all night. At one point Riley started howling, which scared me. But bless him, he dragged himself off the mattress and over to the litter pan. He crawled in and went pee. Then he howled some more because he’d soiled himself and couldn’t scratch the litter.

I jumped up and grabbed a towel, picked him up and wrapped him in it. Once he was dry, he crawled back in bed.

In the morning  I took him to our vet, who sadly confirmed the diagnosis and the inevitable outcome. 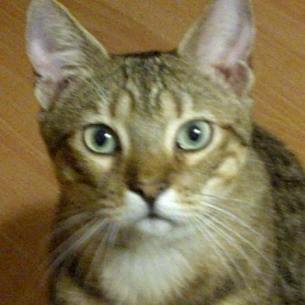