When I had finished checking out, I said that I had requested a taxi for noon to take me to the train station. They said they’d go get me one and to just wait on the sofa in the lobby.

The woman who went outside to flag down a cab couldn’t get one to stop. When she finally did, they refused to drive to the other side of the harbor. Tick tick tick. Ten minutes. Fifteen minutes. I spoke with another staff member who explained that lunch time was a busy time. I explained that this was why I had made a point of asking the night before so that I could be sure to have a cab at the time I needed. He apologized. Twenty minutes. Two men who had just checked out went outside and tried to flag a cab. The hotel worker helped them into one that stopped a couple minutes later. WHAT?! The hotel worker inside with me explained again about cabs not wanting to drive across the harbour.

I told him that my train left at 13:11 and it was 12:25. At that point he became agitated and ran out to the woman outside. They finally managed to flag a taxi just after 12:30. The man told him I was late, and he made a valiant effort. I got inside to the boarding area and the woman got agitated and ran over to the desk to try to get me on the train, but the person at the desk said no. It was just a couple minutes after 1pm.

I’ve just missed my train, and I have to get on another train when I get to Guangzhou. I text the school and go to see about getting on the next train.

The woman tells me I cannot transfer the ticket. I must buy a new one. I’ve just spent the last of my money on the visa.

I walked away and kept walking until I could find a place to sit down and think over my options. I  manage to find an open chair in a waiting area and sit to calm down. I remember that I had stashed some US money in my bag when I flew to Beijing. I found the money and went to the Exchange for HKD. I returned to the ticket window and got onto the next train. Whew!

In the predeparture waiting area, I meet a very nice Brasilan woman who lets me use her mobile hotspot so that I can keep texting back to school to find out what I’m supposed to do. They tell me that I should be able to make the next train, but that it will be close. I texted my college friend who lives in Guangzhou (he had been away on business on the first trip) and asked for his help. Unfortunately, he had a meeting and couldn’t meet my train. I decided to take a taxi instead of the subway once I got to Guangzhou.

But first, I had to get past Immigration. Before the train had stopped, people were up and had their bags ready. Since I knew I had a tight connection, I joined them. I got into a line that was slightly shorter than the rest and waited. I seemed like the other lines were moving faster, but not markedly so. After a while, the transit cops told us to go over into the Chinese only lanes, since all the local people had finished.

Of course everyone sprinted over and by the time I got there I was last, but the line was only about six people. It moved fairly quickly, but I was one of the last two people to get through. I walked out and there were guys asking if I needed a taxi, but when they saw my ticket, they just said meiyou, meiyou* and pointed to the time. It was half an hour to departure and there was no way I was going to make it.

At this point only the two taxi guys and me are in the giant hallway. The one guy spoke a bit of English and I told him I needed the WC and then we could go to the other station (where I hoped I could exchange the ticket). When I finished, he was waiting and since I was again unable to get a signal, he let me use his phone to call Carol. Once she answered, I gave the phone back to the taxi driver and they talked about what I needed to do. When they finished, Carol told me that the taxi driver would help me get a new ticket, on an overnight sleeper train, and drive me to the other station. Another new ticket? Overnight train??

I still had some Hong Kong Dollars, so he took me to the Exchange window and I converted everything I had back to RMB. It was jusssst enough to buy the new ticket and pay 100 Yuan to the driver.

He hustled me out to the taxi and got me to the other train station, but let me out a block away because of traffic. I followed everyone else into a screening area (the place with the xray machines for your bags). There was so much pushing and shoving, especially since you can only go through the scanner one at a time. Just as I was within range of the scanner, the guards opened up the gate and let everyone through. I followed along and went to the actual entrance to the station and stood in line again. Once I got through though, I was tapped and told to bring my bags to a table for inspection.

Ohh kayy. The woman went through my bag like she was looking for something specific. She pulled out the salt grinder I’d bought at Marks & Spencer and wanted to know what it was. I just looked at her and said SALT. I didn’t even have the energy to grab my phone for Google Translate. She finished and motioned for me to go. And I skedaddled because the guy next to me was pulling out an arsenal from his bag….lots of knives, including a meat cleaver.

I found the departure lounge, used the toilet, and then waited in live for only about five minutes until people started walking out to the platform. Of course my car was the next to last one. I was SO tired and was trying to run because the platform was getting emptier and emptier and I did NOT want to miss another train!!

I finally made it and got on board. There was a long line of bunks and I was too frazzled to try to figure out which one was mine. A man looked at my ticket and motioned me down the rows and then a woman pointed me to the correct bunk. I was so happy it was on the bottom, because they were stacked three high! I sat down and shoved my carry-on bag underneath. I pulled the other bag close and just rested while I tried to catch my breath. 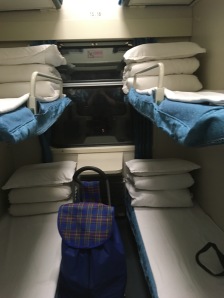 We seemed to be sitting for a while so I decided to find the bathroom at the end of the car. It was locked. It didn’t get unlocked until after the train was moving. Maybe they’re worried about stowaways. Anyway, we finally started moving, I got to visit the WC, and rinse off my dirty stained hands. I was very happy that I had bought a packet of Dettol wipes in Hong Kong. I disinfected my hands and pulled out the bread and cheese I’d bought at Marks & Spencer. A woman came by with a cart of drinks and I had a 5 RMB coin left in my pocket, so I was able to get two waters.

The other passengers had either bought some food at the station, or had come prepared. Some had instant cup-o-noodles that they filled from the hot water dispenser by the toilet. A few were smoking. Bleh! But at least I was finally able to stop moving. I had felt like a perpetual motion machine for most of the day. I didn’t feel like reading, so I pulled out my laptop and wrote the first part of this post.

At 9:30 the train stopped and got more passengers. Ok, I keep typing.

Then a man walks by, stops, comes back, goes back again, and then finally comes and sits on the bunk next to me – only two feet away!! Holy moly. It hadn’t occurred to me that a guy would be sleeping within reaching distance.

I kept typing, trying to come to terms with this new twist. Well, he was fully clothed and so was I, and it definitely wasn’t anything like ‘It Happened One Night’. Ok, I’ll just keep typing.

At 10:00 the steward came down the aisle and barked at me to lay down, motioning so I’d know what he meant. And then the lights went out.

I tried to keep typing but the glare was irritating. I put away the laptop and pulled out my Kindle to read, but the darkness combined with my exhaustion meant that I fell asleep pretty quickly.

Sadly, my sleep was interrupted all through the night when the train stopped several times and people kept getting on and off.

And the guy two feet away snored.

Sunrise through the dirty window.

* meiyou, meiyou  (sounds like mayo, mayo) means no, no